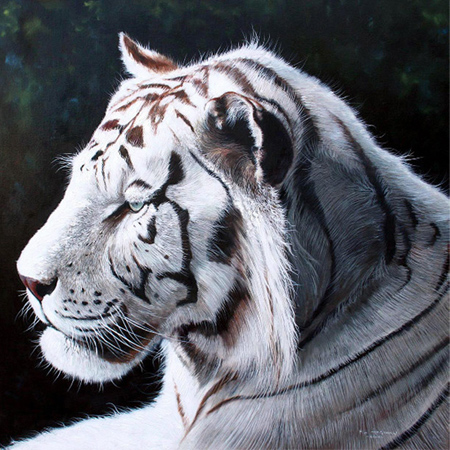 'A Brush with the Wild' Big Cats and African Game Paintings from Pip McGarry, one of the world’s leading wildlife artists.

A Major solo exhibition at The Colomb Art Gallery, London.

All proceeds from the painting auctioned at The Private View evening and a percentage of all exhibition sales was donated to the Five Talents microfinance charity.

'A Brush with the Wild’ is in partnership with ‘Five Talents’, the microfinance charity - creating jobs in Africa and the developing world.

Winner of the City of London Sustainable City Awards 2008.
See below for details.

Pip is a self taught professional wildlife artist with an international reputation. He has been the ‘Artist in Residence’ at Marwell Zoological Park in Hampshire since 1998 and is the founder and Chairman of ‘Marwell International Wildlife Art Society’ (MIWAS), currently the largest wildlife art society in Europe.

Pip McGarry is exclusively represented in London by
The Colomb Art Gallery. For all available art work click here.

'A Brush with the Wild’ is in partnership with ‘Five Talents’, the microfinance charity - creating jobs in Africa and the developing world.

Our motto is “Fighting poverty, creating jobs, transforming lives” – using microfinance to give people a hand-up out of poverty rather than a hand-out.