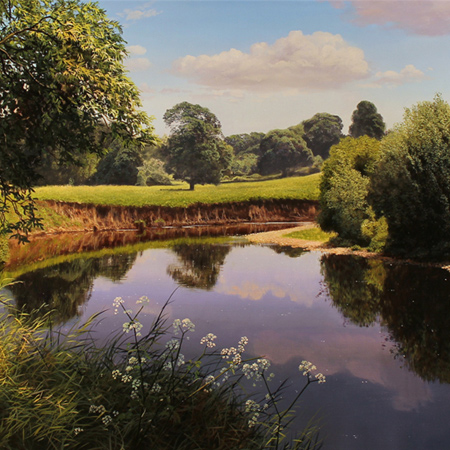 Instantly recognisable for their intense detail, Michael James Smith’s British country scenes are inspired by the classic landscape traditions. His works have been compared to that of Constable and Gainsborough, with blissful rivers playing a focal point in most of his paintings.

Proving his artistic talents Michael James Smith has recently taken a new direction into the world of figurative painting, driven by narrative rather than nature. From the urban socialite to the fallen office worker his new works imbue an acute sense of the modern world now.

Philip Short, Managing Director of The Colomb Art Gallery, London: “Michael’s new figurative work proves his artistic ability across distinctly differing genres, from country to contemporary. His landscapes beautifully represent the great British landscape whereas his figurative works represent a frank observation of our modern world. At first view both works seem to be from different artists but take a closer look and Michael’s signature brushwork can be seen on each leaf and freckle.”

“When I saw Michael James Smith’s work for the first time, I as most people, was impressed with a sense of precision and clarity. His shades were faithful, tone of light superb and his eye for detail defined by an accuracy rarely seen in modern landscape paintings. This firmly traditional approach has made Smith’s work refreshing yet honest and characteristic of fine art.

Born in 1976, Smith is a young artist with a mature approach to his art work. Under the guidance of his father David Smith, also a recognised British landscape artist, Michael comes from a lineage of self-motivated and artistic individuals. As is often the case with many family learned trades, his art work is unpretentious yet confident in its ability. In fact, with admiration, the same could be said of both father and son.

Michael’s inspiration is drawn from the classic English landscape tradition comparable to the works of Constable and Gainsborough. His, as with work from these classic painters, holds a palpable love for the British pastoral rural landscape. Rivers, namely those in Derbyshire, Wales and Yorkshire, play a focal point within most of his paintings.
Bucolic in nature, Smith’s work are unsentimental and honest. A tendency for many modern landscape artists is to over-romanticise and exaggerate, whereas Smith’s work is driven by both truth and beauty combined. Looking closely, each leaf is painted with an intense observation.

A striking characteristic of Smith’s art work is the clarity of his aerial perspective. The term refers to how atmospheric conditions affect the perception of distant objects. In other words, the appearance of the air which separates the viewer and the subject. With this technique objects that are further away appear to be lighter in their tone, cooler in colour and less detailed. Smith strikes each element with outstanding competency.

As a young artist with artistic maturity and direction, Michael James Smith is a leading British landscape artist. His approach is established and grounded in tradition whilst progressive in terms of light and technique. His work is inspiring, vibrant and redolent of Britain’s timeless natural beauty and I am sure will continue to impress on first, second and third viewings." Written by Philip Short for the Renaissance Magazine, 2010.