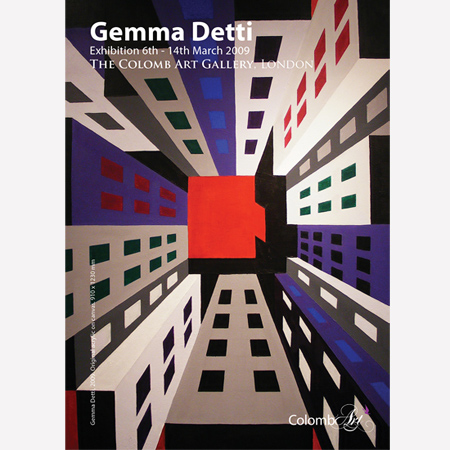 Gemma has lived in London since 2004 with her current work principally dedicated to unearthing and interpreting emblems of the city’s man-made landscape. She employs sharp lines and strong colours on large canvases to striking effect. Besides her “architectural compositions”, she also paints figurative subjects, though the approach is softened and less analytical.

Gemma was born in Rome, where she studied art and later trained as an architect. Nevertheless her home is in the southern part of Tuscany, where she specialised in the restoration of farmhouses, historic buildings and the construction of new hotels and restaurants. She also spent many years in the South of Italy in the reconstruction after the earthquake of 1980.

In 1992 she studied fresco and marbling techniques in Urbino, which she applied to walls, plaster panels and wooden furnishings. She now works on canvas treated with quartz paint, creating a wall-like surface, on which she lays several coats of acrylic paints with natural pigments.

Gemma first showed her work in London in 2005 at the Salon Gallery, Westbourne Grove. In 2006 she was a founding member of the Art in Marylebone and has taken part in its exhibitions at the Old Fire Station, Marylebone (2007) and at the Old Marylebone Library (2008). Her work was shown at the Battersea Art Fair in October 2007 and recently at the Westminster Open Exhibition.

The Colomb Art Gallery, Marylebone is proud to be exhibiting a number of Gemma Detti’s geometrically stunning pieces, and her architectural portraiture is also available on commission. Please contact the gallery for details.